Ok truth be told I am a big time Lakers fan and this season is a big disappointment for me, one of the things that irks me is that the Lakers are being paid the most of all the teams in NBA but lack the results. In this blog post I am going to compare the winning pct per team per dollar paid so we can see the results.

First data source that I am going to use is http://espn.go.com/nba/salaries/_/page/1 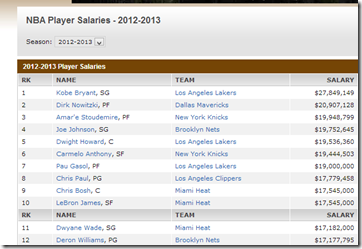 this I want to combine with http://espn.go.com/nba/standings/_/group/1 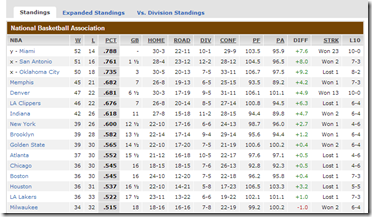 I start by importing the standings, go to Excel and the Data Explorer tab and select “from web” 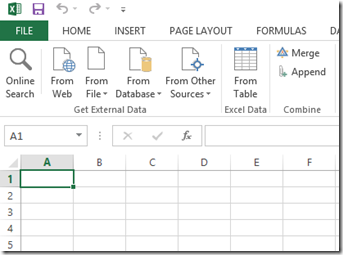 Paste in the URL and select Table 0

Now I want to remove the first row so I can select Remove Top Rows and select the first row and I also select Use first Row as Headers: 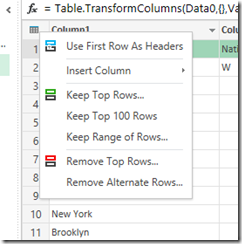 Now I am only interested in the Team name and win – loss pct so I am removing all other rows by selecting Hide Columns:”

Now I want to clean up the Team name to remove unwanted characters: 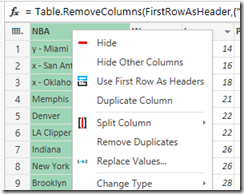 I select Replace Values and remove y – and x- with an empty value.

Ok I am happy with the result and I press Done to import the data into Excel: 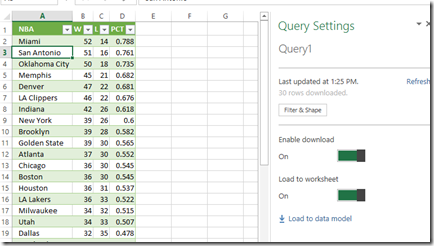 I want to rename the Query to NBA Standings and Load it to the Data model.

Next up is import a list of all the players and their Salaries. Again the same thing Import from web, this time as is:

I press OK to import and rename the Table: 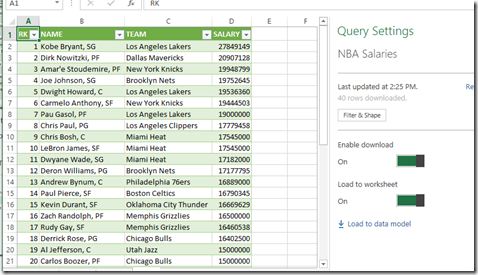 Now we only see 40 players here as this webpage we import from actually has multiple pages. The cool thing about Data Explorer is that under the covers its is a special language called M. What we are going to do now is make a function out of the import function that we can call iteratively for each page.

First I need to make sure I can actually edit queries, I go to the Data Explorer tab and select “Enable Advanced Query Editing”:

Now I go back to the table I just imported and click on “Filter & Shape” and click on this little “script” icon that now appears:” 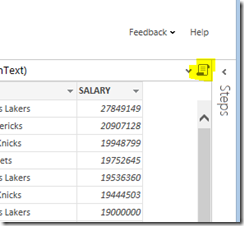 This pops open the script dialog: 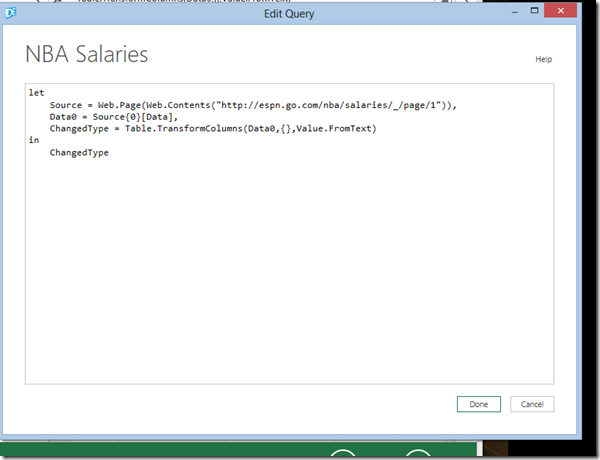 I change the script to the following:

This will add a empty sheet to excel with just this function, nothing can be shown on the table but it needs to be there, I also renamed the table to Query.

Ok now I want to use that function for all 14 pages. I go to Data Explorer and select import from other sources, “Write Query”.

This opens a blank query window:

Here I paste in the following: 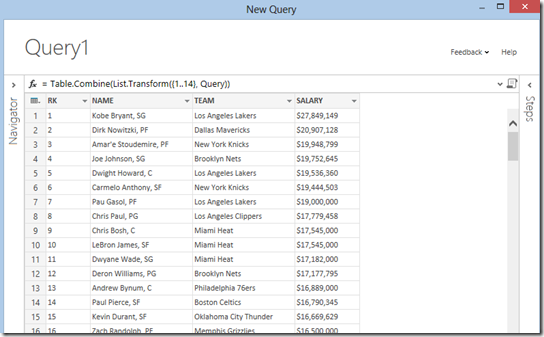 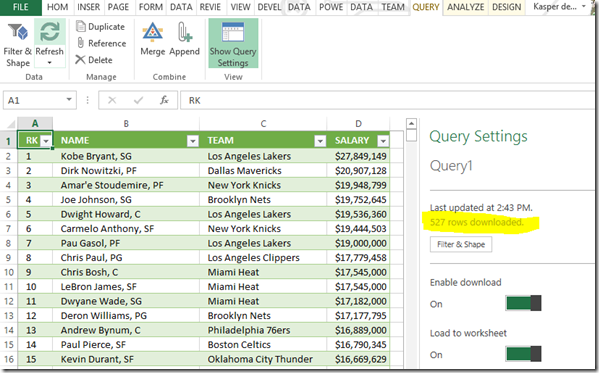 Pretty awesome right ? Now lets add this to the model as well by clicking load to data model:

Quick tip, don’t rename the tables. This doesn’t work in the current build of Data Explore and will screw up the connection to the model.

Now I want to create a relationship but we have problem, how do I relate: 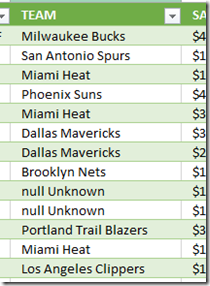 We need to make the values in the column the same. I will plan to extract the city from team in dataset 2 to combine it with dataset 1 and remove LA from dataset1.

So I click on filter and reshape again at the salaries. I select the column and select by delimiter, select space and at the right-most delimiter.

That will give me:

Now I rename the Team.1 to City and Team.2 to Team. The last problem is that LA has two teams. You can see that in the first dataset they solved that by deviating from the norm by adding LA Lakers and LA Clippers. I need to do the same here.

First I rename Los Angeles to LA. Now I add a new column that based on my expression add the team name if the city is Lakers. I do right mouse click on the Salary column and select Insert column, Custom… This opens a new window where I can type a expression. What I added was:

This will give me the result that I want (I also renamed the columns):

Except that the steps did not anticipate a NBA team with two words “Trail Blazers” . So I added a special step for that to the formula”:

I press OK and reimport the data.

Now I am able to create a relationship in PowerPivot: 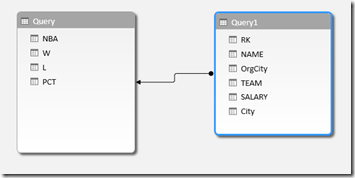 and start my Analysis by creating a Pivottable. I also formatted PCT and Salary in PowerPivot to get a better view.

There is a large amount of players in there that are not assigned to any team. I want to filter those out of the result set. So I go back to Data Explorer and deselect players with an empty city: 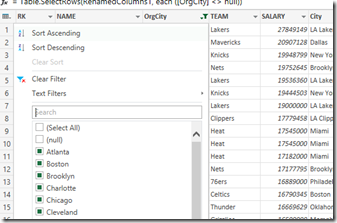 This gets rid of 100+ players that I don’t care about.

Now lets look at the data and add a measure that determine the PCT of Salary compared to all other teams.

I add the following measure to PowerPivot:

The first shocking result was when this measure returned the value of 1.8 billion ..:

Now I add a percentage of salary for each team against all salaries. 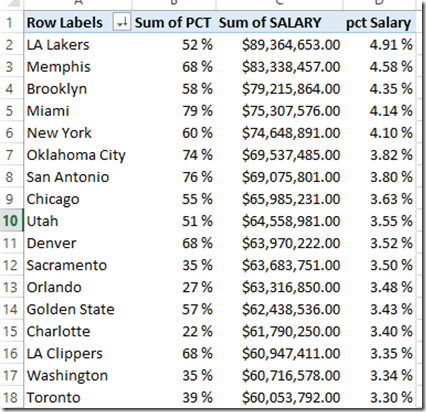 To make it a little bit more clear instead of PCT I also create a rank:

Rank by PCT of winnings:=RANKX(all(Query[NBA]),[Sum of PCT])

this really gives you an idea that money doesn’t buy you everything: 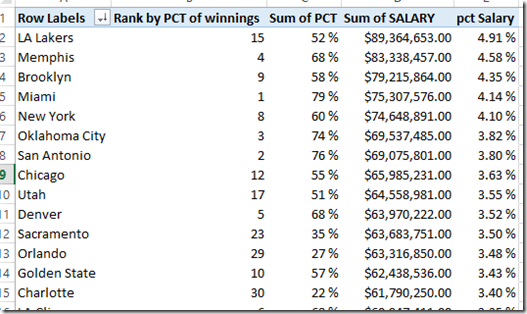 The most interesting one is Indiana all the way down with almost half the salary costs as the Lakers at 7th best team in the NBA:

and the teams above and below the Lakers earn less together  then the Lakers themselves..

Next up I would like to add a measure that will calculate the salary per player. So add the following two measures:

Salary per player:=sum(Query1[SALARY]) / [nr of players]

Unfortunately that didn’t give us much interesting information, besides what we already know. It is interesting to see that a few teams have almost 20 players on their team:

While Chicago and the Lakers are not even capable of doing 5 on 5 in training ..

Hope that gives you some idea of the power of Data Explorer and PowerPivot together.

11 Replies to “NBA team spending and their results with Excel, PowerPivot and Data Explorer”

This site uses Akismet to reduce spam. Learn how your comment data is processed.

Via RSS
Via Email